Putting up the Christmas lights at the Triangle

We have put the Christmas lights up again at the Triangle to make it look jolly. It has rained a bit since they went up so there aren't any photos to show off yet. So, really you will just have to go and have a look. They are very pretty and will add a sparkle to the festivities!

We had enough people turn up to help plant a load of bulbs, mostly mini daffodils and tulips, in Walnut Way. Most people think of this area as being at the back of the Co-op in the Triangle but in fact there are lovely trees and over the years we have planted bulbs to give a spring welcome to the green. This year we have added the new bulbs to make an even brighter show.
Thanks to everyone who came and helped. Your efforts are much appreciated. And thanks to Jenny for organizing it all.

A walk in Blundells Copse

It had been such a boiling hot day. We almost don't have the energy to go... But in fact once we had got under the canopy of the trees by the Bran Close entrance it all cooled down considerably and became rather pleasant. It had been some time since we organized a walk in Blundells but we thought that since quite a lot of work had gone on there it was worth taking a look to see how things were going. As we know, Ron goes regularly and keeps things tidy where he can manage - and indeed he came on the walk armed with a pair of vicious looking shears which he used from time to time on the way round. We also took in the work that had be recently done to repair the hedging along the path by Calder Close.
What a nice gentle walk.

Our stall at the local fete (and the answers to the quiz!)

For quite some years now we have run a stall at the local fete. Everything we do is free - family's spend enough as it is so they welcome things to do that don't cost any money. We had our Circular Walks leaflets on display, and best of all we were giving away our Tilehurst Memories booklet and promoting the website (www.tilehurstmemories.org.uk) too. There is still a lot of interest in Tilehurst's past. Quite a few people promised to send in their memories too. 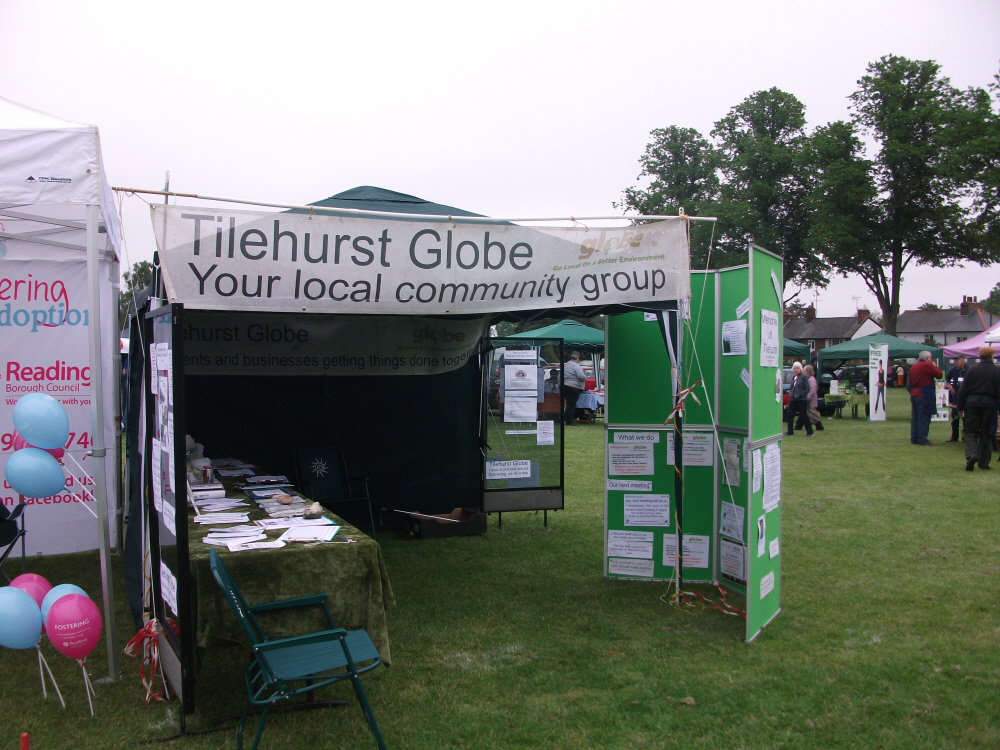 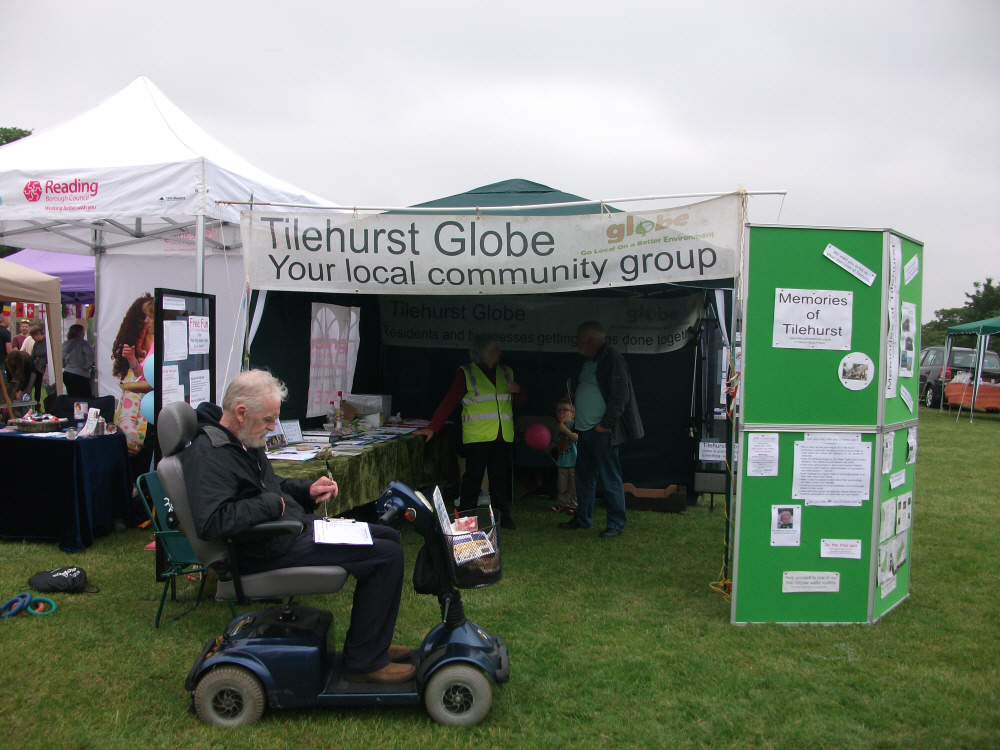 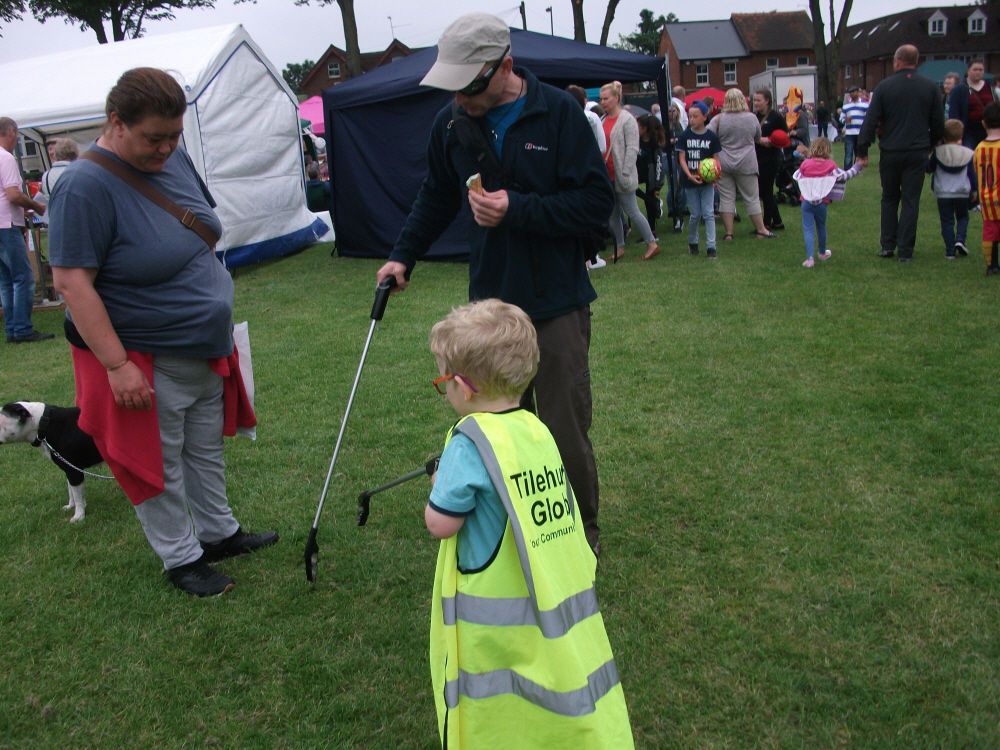 And of course we ran our free quiz. People expect it! Local sponsors donate great prizes to make it all very interesting. This year the quiz was entitled "How long does litter take to rot down?" People found it very hard to guess. Reassuringly people wanted to know what the answers were - so we had to post in on our web site straightaway afterwards. It is really horrifying. Casual litter doesn't necessarily rot at all. Not surprisingly no-one got all the questions right, but it nevertheless it is all a bit depressing. Some of the food packaging that gets tossed aside doesn't ever rot down. This state of affairs obviously needs looking into. Why do we need to use this stuff at all. Matt and Min went around picking up litter to make a point - but guess what - all it did was encourage people to drop their litter with the knowledge that someone else would pick it up. Oh, despair.

The prizes were donated by The Lemon Plaice, Tilehurst Village Butchers, The Plough and The Co-op in School Road. Thank you all very much for your kind generosity.

But just so you know, here are the answers again.

The answers are somewhat controversial. One of the main factors that controls how long litter takes to decompose is whether water is present. Water hastens the breakdown process of most items – particularly salt or sea water. So the fact that this is litter; i.e. outside in public spaces, means that it would get wet, from time to time, speeding up the decomposing process.

These answers are the ones used to select prize winners. They are not necessarily right or scientifically proven. They can readily be found on the internet, together with remarks about the breakdown process. For example, a plastic bag may take 10 years to decompose but, in truth, it breaks down into bits of plastic, so can easily be ingested by animals or marine life.

We hope you enjoyed yourself at the fete, despite having to think so hard.

Despite the miserable winter, we braved the cold and turned out to clear rubbish that you lot have dropped! On Saturday we cleared lots of rubbish by the Triangle - down as far as the Horticultural shed and Blagrave Rec. Also on the Saturday morning we cleared some of McIlroys. There we were helped by some of Nature Nurtures Dad's and children. On Saturday afternoon we had a good go at Blundell's Copse. Then on Sunday afternoon we cleared some of Gypsy Lane.
It was a really disappointing to find that each of these places which we had chosen to clear because of the pretty nature of the sites, had suffered from serious dumping by careless and inconsiderate people. Some are even people who live backing on to the parks and they dump rubbish over their own fences - out of sight out of mind.
However, we did have the pleasure of visits by the jolly bin men to clear up the rubbish that we had cleared. Thank you. 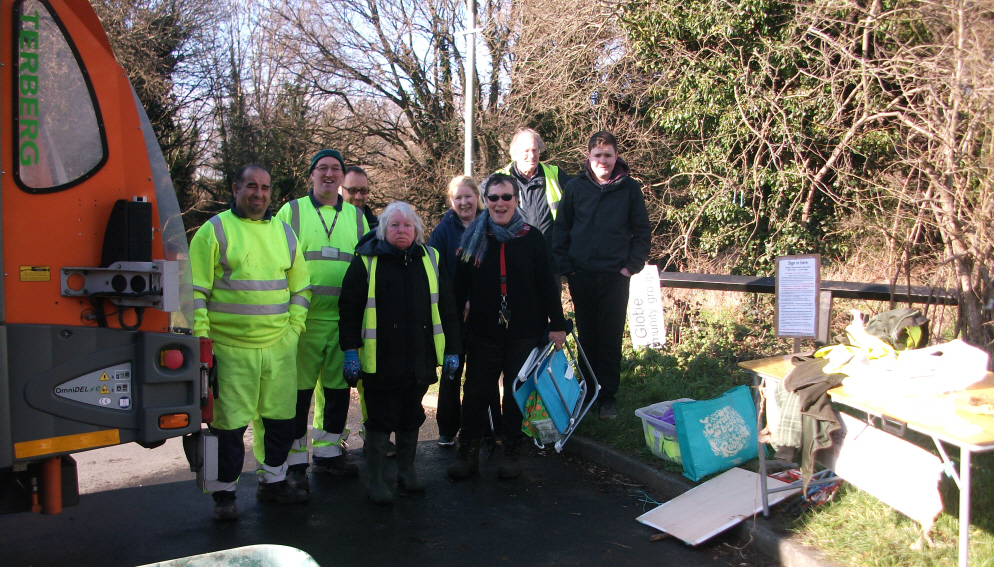 Volunteers were entered into a raffle. The fantastic prizes were donated by local businesses Many thanks to all of you - both volunteers and prizegivers.

Planting snowdrops and daffodils by the library

Last year we said "It is about time that Tilehurst Globe made some money; they could sell fine weather! Every time we hold an event (well at least 99% of the time that we hold an event) despite warnings, we have decent weather. And this was the case on 14th February 2015 when we planted bulbs....!"
Not so this year, although it was not as bad as feared. We had decided to fill out the snowdrops on the left of the library. We had buckets of them to plant. Fortunately we had loads of people to help who didn't seem too bothered about the rain. Ray and Phil helped Jenny dig some holes to get things started. Then the scouts and guides and brownies arrived. Some things ended up as mud pies but on the whole most of the plants went in to the right places and this year the snowdrops were accompanied by daffodils - so watch out for them! The snowdrops on the right of the library that were planted before certainly look splendid this year - and lets hope that these new ones do as well.
Very many thanks to all the people who came and helped. 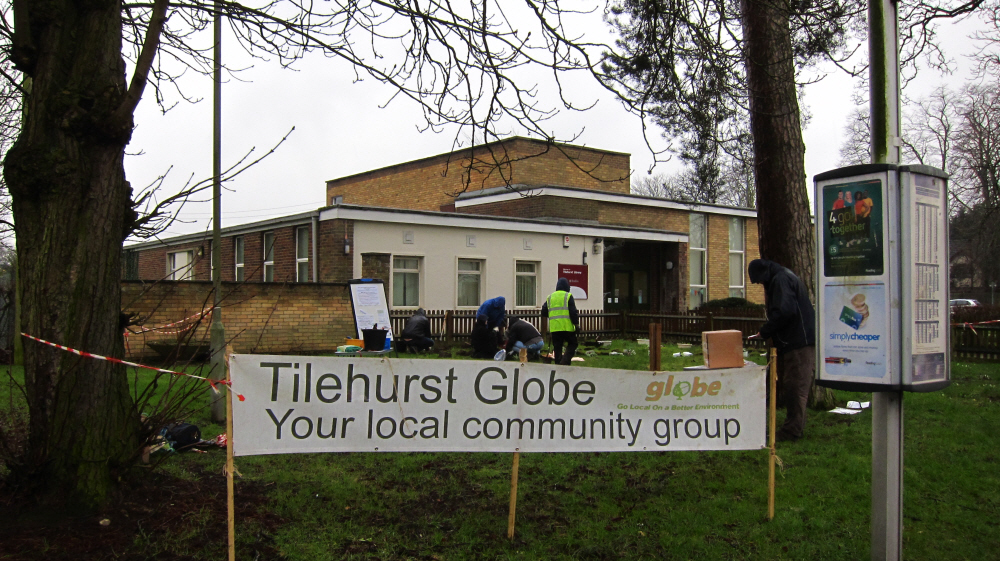 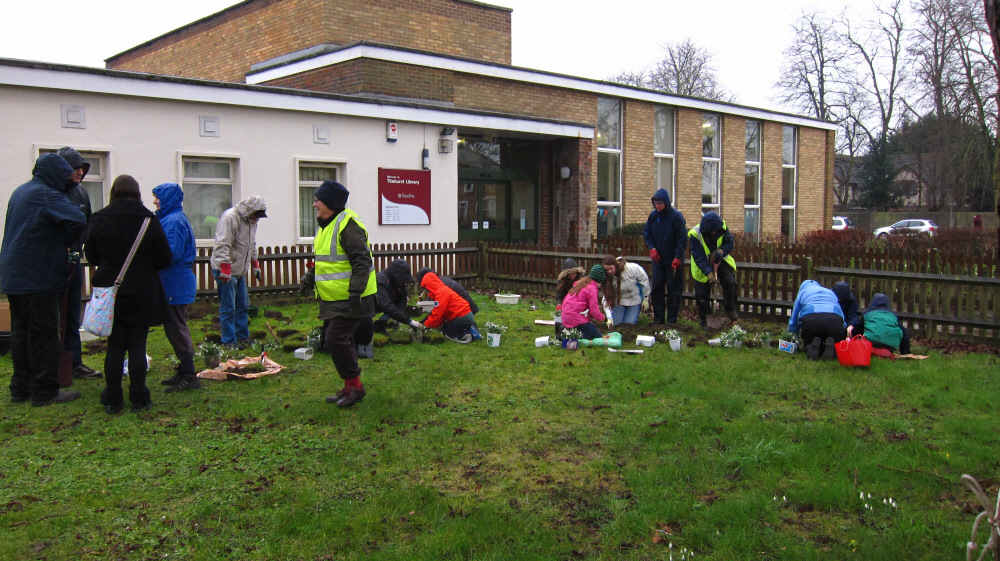 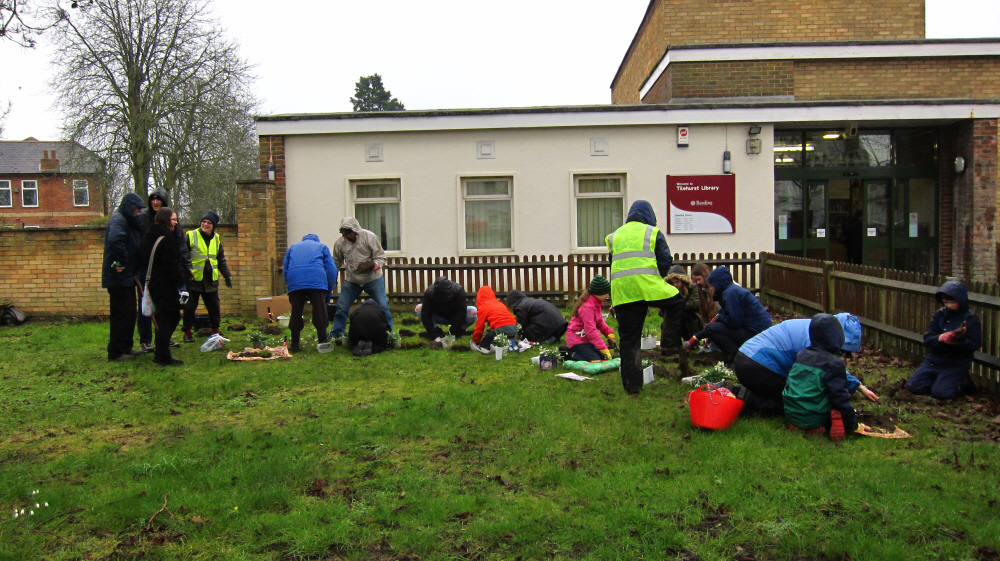 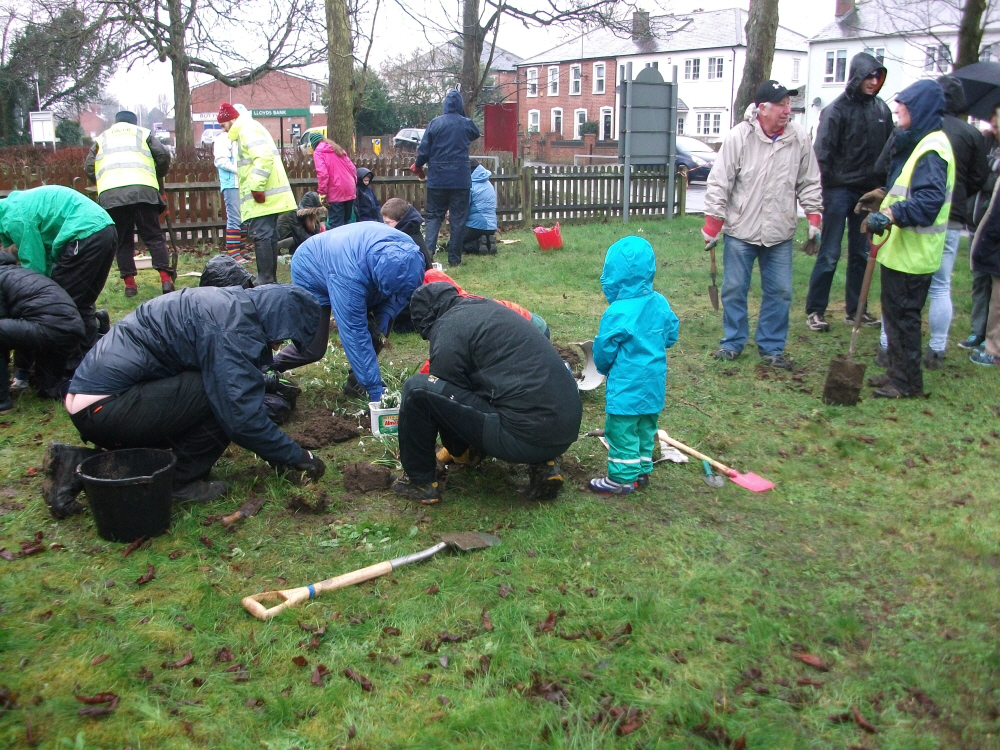 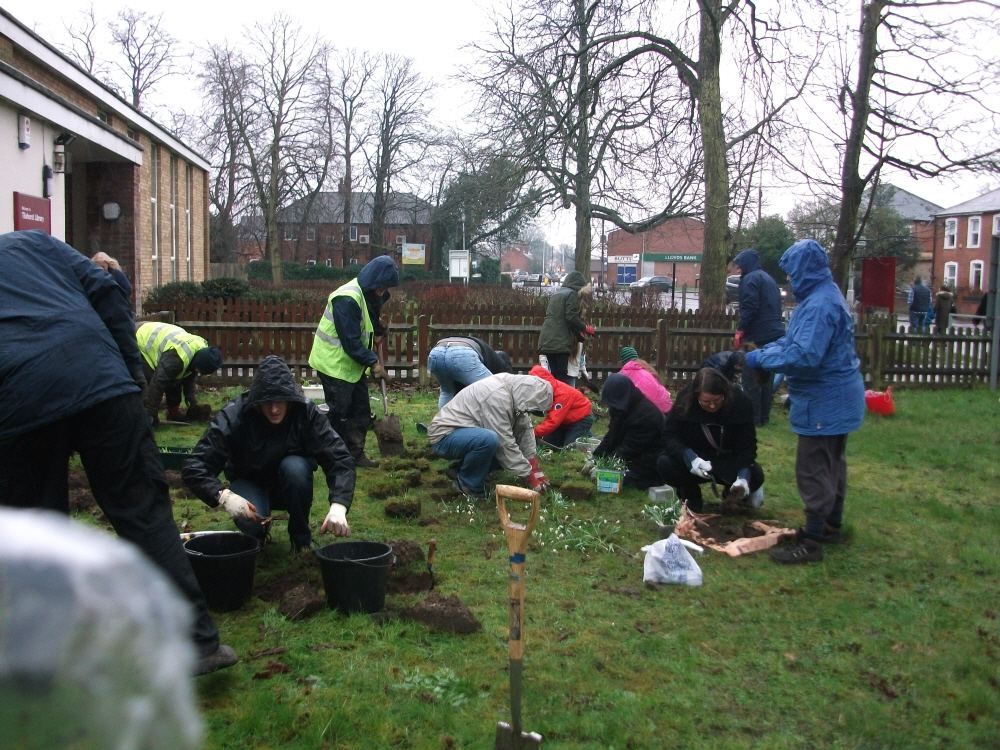 If you want to know more about the projects we are involved in contact us.